A TRIBUTE TO RAE MOSES 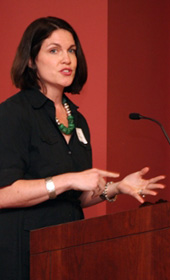 For the last several years, I’ve had the pleasure of teaching Language & Prejudice, which was originally developed by Rae.  This is a course that is unique in introducing students to linguistics by examining issues surrounding language that are highly applicable to real life.  Of course this isn’t to say that our other courses do not apply to real life (though some may apply more than others!).  But I think it is a real tribute to Rae that this course continues to be so popular, and to strike such a chord with students, long after she first created it.

One of the main themes of Language & Prejudice is examining prejudice that may be evoked based on the way someone talks: the language they speak, the dialect they use, or their accent.   On the first day of class we begin by listening to a recording of someone who speaks with a southern accent describing a camping trip he took with his friends.  I ask students to listen and note anything interesting about the recording: its content, the speaker’s speech, his word choice, the grammar he uses.  Then I ask them to list the personal characteristics of this person as best they can.  Surprisingly, even in a course called “Language & Prejudice,” I always get descriptions that are largely consistent with negative stereotypes of southerners.  Students will say that this man is not highly educated (high school, maybe some college), if he works at all, he probably has a blue-collar job, he has likely never left the area he was born in, and doesn’t speak any other languages, etc.  Now some students may shy away from making these types of generalizations, saying we can’t really know what this man is like based on the recording.   But if I say just give your best guess, their answers inevitably reflect this pattern.  What is striking about the results of this activity is the consistent, wide agreement I get across the class (in classes of more than 100 students): virtually no one gives answers inconsistent with the stereotype.  And after I tell them about the real speaker: he is a manager at a publishing house, has an MA in classics, has lived in Rome, knows Ancient Greek, etc., they always sort of nervously laugh.  Now these students are earnest and well-intentioned.  They do not want to be prejudiced.  But they can’t help but have this stereotype evoked when they hear this recording.  And I think it speaks to the strength of dialect and accent as a marker of group identity, and how closely it is tied to stereotypes surrounding various groups, that I continue to get the same results year after year.

Of course in this context, there really are no consequences to the type of judgment being passed by the students.  But you don’t have to look very hard to find cases where people freely admit to prejudice or discrimination based on the way someone talks.  I always tell students the story of a woman who works at one of the major banks in New York, who was involved in the hiring process for new college grads.   She mentioned a job candidate they had that was excellent in every way, but was not hired specifically because she had a southern accent.  The consensus between those involved in the hiring process was that this candidate just couldn’t be taken seriously with a southern accent in New York, and this was freely offered as the reason she did not receive a job offer.  In this day and age, it would be unimaginable for anyone to admit to not hiring a candidate because of their race or ethnicity (although certainly this type of prejudice exists).  But prejudice based on language continues to be discussed freely, and really is one of the last types of prejudice that has wide social acceptance.

Most students really respond to this course, and I think take something with them that will last far beyond their time at Northwestern (or at least I hope so!). We discuss issues surrounding language policy, like whether English should be the official language of the US, or how children who come to the US not speaking English should be taught in schools.  These are issues that are important, and that students may have to vote on one day.  So we aim to give them grounding in facts about language and linguistic analysis, so they can be better informed citizens (and hopefully spread the word!).

I think it is a real tribute to Rae that even as times change, and issues change, this class remains so relevant.  I knew Rae since I was a graduate student here myself, and my memories of her always involve her dedication to teaching, and to creating the next generation of successful teachers.  I look forward to continuing her legacy in one small way with Language & Prejudice.